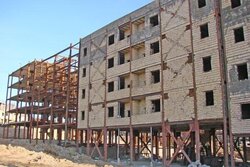 The operation for the construction of 25,000 units of National Housing Movement started in Alborz province, the director-general of Transport and Urban Development Department of the province announced.

Reza Khaleqi said: “National Housing Movement is a collective effort by the government that aims to provide house for all groups of the society, and we, in turn, have a major role in this important goal.”

The ceremony to begin the mentioned operation and also to launch some development projects in the housing sector was attended by Transport and Urban Development Minister Rostam Qasemi.

Following the government’s public call for the registration of people needing affordable housing units under the framework of a new program called the National Housing Movement, so far 2.387 million people have registered in this program.

As reported, the construction of 750,000 such housing units is underway across the country under the framework of the National Housing Movement.
Since the beginning of the National Housing Action Plan in 2018 so far over 1,461,528 people have registered in the program and considering the applicants in the new program, a total of 3,812,655 people have registered in the government’s housing plans.