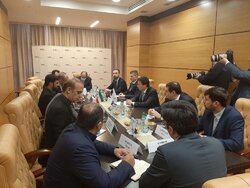 Iran and the Eurasian Economic Union (EAEU) are going to upgrade the Preferential Trade Agreement (PTA) already reached between the two sides to a Free Trade Agreement (FTA) by the end of 2022.

The issue was stressed during a meeting between Head of Iran’s Trade Promotion Organization (TPO) Alireza Peyman-Pak and the minister in charge of economy of the Eurasian Economic Commission (EEC) in Moscow, the TPO portal reported.
Iran-EAEU annual trade rises 66%
The value of trade between Iran and the EAEU members reached $5.643 billion during the previous

Iranian calendar year (ended on March 20), registering a 66-percent rise compared to the figure for the preceding year.

According to Spokesman of the Islamic Republic of Iran Customs Administration (IRICA) Ruhollah Latifi, the weight of Iran-EAEU trade in the mentioned year stood at over 13.127 million tons which was also 51 percent more than the previous year.

Iran exported 2.77 million tons of commodities worth over $1.170 billion to the mentioned union to register a 3.5 percent increase in terms of weight and 12 percent growth in terms of value.
After several years of negotiations, Iran and EAEU finally reached a PTA in 2018 based on which about 862 commodity data-x-items are subject to preferential tariffs. The PTA came into effect on October 27, 2019.

As the agreement was designed to be in effect for three years, it is to expire in October this year. For this reason, the parties have recently begun technical and expert negotiations to upgrade the PTA to an FTA.

In this regard, Iran and the EAEU held their first round of negotiations on the matter in Tehran on July 19, 2021. According to Hamid Zadboum, the former TPO head, the two sides have agreed upon most terms related to the outlines of the PTA; the partner countries have reached an agreement to gradually remove tariffs and duties on most imports and exports in the near future to expand business opportunities.

Iran is a very important market in the region and the development of ties with this country is of high significance for the EAEU members (Russia, Belarus, Armenia, Kazakhstan, and Kyrgyzstan).
The preferential trade agreement between Iran and this union has laid the ground for the expansion of trade ties between the two sides.