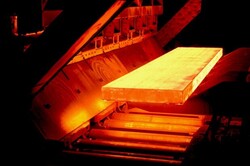 According to the report of Public Relations of IMIDRO, Global crude steel production during the first 3 months of current year stood at 456.6 Mt, registering a %6.8 fall compared with the corresponding period of the last year, WSA reported.

Also, World Steel Association report shows that Iran’s steel output during the first 3 months of the current year stood at 6.9 Mt, indicating a %4.4 decrease compared with the same period of the year before. Meanwhile, steel output of Iran during March 2022 were 2.3 Mt, down 6.1 percent YOY.