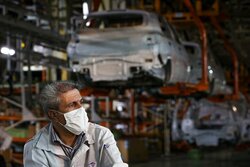 According to the data, the production by the mentioned companies has fallen 29.3 percent compared to the previous year’s same month in which the output stood at 64,279, IRNA reported.
During the said month, IKCO manufactured 25,041 vehicles, which was 25.9 percent less than the output in the same period of the previous year.

Iran’s major carmakers had manufactured 867,363 vehicles in the previous Iranian calendar year 1400(ended on March 20), which was 3.7 percent less than the figure of the preceding year.
According to Codal data, During the previous year, IKCO manufactured 451,121 vehicles, which was six percent less than the output in the Iranian calendar year 1399.

SAIPA manufactured 304,533 vehicles in the mentioned year, registering a 3.4 percent decline in comparison to the figure for the preceding year. And Pars Khodro manufactured 109,838 vehicles in the past year, showing a 6.4-percent rise from the output of its previous year.
Back in January, Industry, Mining, and Trade Minister Reza Fatemi-Amin announced the implementation of a two-year plan for the auto industry based on which this industry will undergo serious changes and improve significantly.

Stating that nine transformation projects have been prepared for the automobile industry, Fatemi-Amin said: "The general plan is that in [the Iranian calendar year] 1401 (started on March 21) the structure of the automobile industry and the relations between parts manufacturers and automakers will be reformed and the overall promised production target will be achieved in [the Iranian calendar year] 1404 (begins in March 2025)."

Iranian Industry, Mining, and Trade Ministry’s programs for the current Iranian calendar year show that the manufacturing of 1.2 million cars has been put on the agenda.
Iran currently stands in 20th place among the world’s top automobile manufacturers producing 821,060 vehicles by the end of 2019, according to the Organisation Internationale des Constructeurs d'Automobiles (OICA).