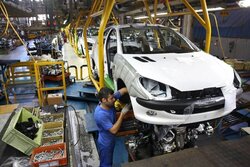 Iran has been ranked the world’s 19th biggest automaker in 2021, according to the latest report released by the International Organization of Motor Vehicle Manufacturers (OICA).

world's largest automakers, respectively.
Iran plans to reform its auto industry in order to increase both the production and quality of its products.

In late December 2021, Fatemi-Amin had announced that his ministry prepared a nine-axis program for evolution in the automotive industry which would be published soon.
The mentioned program includes all challenges and solutions in this industry, the minister said.