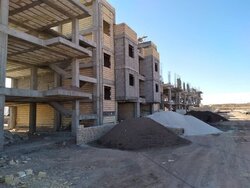 As announced in a meeting to review the strategies for organizing the housing market, the first series of National Housing Movement units will be delivered to the applicants in the second half of the present Iranian calendar year (September 23, 2022-March 20, 2023).

The mentioned meeting, held on Wednesday, was attended by Transport and Urban Development Minister Rostam Qasemi and Vice President for Economic Affairs Mohsen Rezaei.
On June 11, transport and urban development minister announced that 1.35 million units of National Housing Movement are currently under construction throughout the country and the number is increasing every day.

The ceremony to begin the mentioned operation and also to launch some development projects in the housing sector was attended by the transport and urban development minister.
National Housing Movement to construct four million housing units in four years is one of the major plans of the current government in the housing sector.
According to the plan, out of these four million residential units, 3.2 million units will be constructed in cities and 800,000 units in villages, some of these units are currently being constructed after providing lands and preparing the necessary conditions.
Land supply was the first condition for the realization of the national movement plan and housing construction, in this regard, a series of measures were taken by the government and Ministry of

Transport and Urban Development. According to the latest statistics, the lands of 2.8 million housing units of National Housing Movement have been provided by the ministry.
Although, studies show that the provision of land and financial resources are two serious obstacles to the construction of this number of residential units.
Three weeks ago, Mohammad-Saleh Jokar, a member of the parliament, said that the young people are having trouble paying the National Housing Movement installments.

Referring to the difference between the implementation of Mehr Housing Plan (initiated in the previous government) and National Housing Movement, he said: "Today, a young man with a monthly salary of between 50 million-60 million rials (about $190-$230) has very difficult conditions for the installments of this plan, which should be considered to solve this problem”, the MP criticized.

‘Decline in housing prices to continue in next 2 years’

Establishment of 40 new towns on agenda