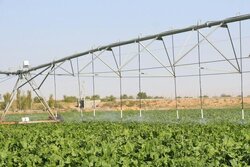 As stated by the governor-general of Semnan province, 34,000 hectares of farmlands are equipped with the modern irrigations systems in this province.

Development of this system is one of our priorities in the province”, Mohammadreza Hashemi noted. Saying that there are 197,000 hectares of farmlands in Semnan province, the official said, “We are trying to have 30 percent of the farmlands equipped with the modern irrigations systems in the province”.
As stated by the project manager of the Agriculture Ministry’s smart irrigation systems development program, so far 2.6 million hectares of the country’s farmlands have been equipped with modern irrigation systems.

Fariborz Abbasi has said that completing semi-finished agriculture projects is the priority of his ministry in the current Iranian calendar year, and expanding the modern irrigation network across the country is of significant importance in this regard.
The deputy agriculture minister noted that the project for implementing irrigation networks in the west and northwest of the country is about 70 percent completed and the ministry is pursuing to get the necessary funding for the remaining 30 percent.
The official expressed hope that considering the budget allocation for the provinces at the beginning of the current Iranian year, the ministry would be able to develop the project in terms of both quantity and quality.

The purpose of implementing the plan of modern irrigation systems is to increase the productivity and sustainability of water and soil resources in the country to ensure the sustainable production of agricultural products.
“Over the past three years, each year, an average of 150,000 hectares of farmlands have been equipped with modern irrigation systems, and we have witnessed a 300 percent jump”, the official said.
Agriculture Ministry is also taking the necessary measures for supporting the domestic manufacturing of equipment used in these systems, he added.
Back in September 2021, Abbasi had said that 95 percent of the equipment used in such systems is manufactured inside the country.

The official said the ministry has comprehensive plans for indigenizing the knowledge for the production of the other five percent as well.
He pointed to the filters and drippers in modern irrigation systems as the equipment whose domestic production is on the agenda and predicted: “In a two- or three-year plan, part of the imported equipment and supplies will be produced by domestic manufacturers.”

Abbasi mentioned the quality improvement of modern irrigation systems as one of the main strategies of Agriculture Ministry and said: "We believe that along with the quantitative development of new irrigation systems, quality improvement should also take place to improve productivity and ensure food security by increasing water efficiency in the best possible way.”
He further underlined educating farmers, officials, and managers of companies active in the field of production and implementation of new irrigation systems as one of the programs that his ministry is pursuing in order to improve the quality and optimal use of these systems.

Referring to the activity of 2,400 private companies in the development of new irrigation systems in the agricultural sector, Abbasi said: “The private sector in this field includes 350 consulting companies, 1,600 contractors, 400 manufacturers and suppliers of equipment, and a number of monitoring firms.”