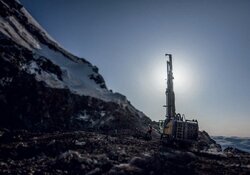 Head of Iranian Mines and Mining Industries Development and Renovation Organization (IMIDRO) announced that the organization has identified 16 new promising mineral zones in Kermanshah province, in the west of Iran, and intends to complete the next stages of exploration.

Vajihollah Jafari said that IMIDRO has conducted 7600 kilometers of aerial geophysical operations in this province. Among the results were the identification of seven areas with potential for iron ore and poly-metal in Sonqor, Kangavar, and Sahne.

Noting that this organization has no restrictions on exploration in the provinces, the IMIDOR head clarified: "Considering the valuable mineral potentials in Kermanshah province, the completion of exploration operations will provide investment opportunities for this province."
As stated by Head of Iran's Geological Survey and Mineral Explorations Organization (GSI) Alireza Shahidi, there are currently 55 billion tons of proven mineral reserves in the country.

According to Shahidi, increasing the depth and expanding areas of the exploration operations could add to Iran's current mineral reserves.
“The GSI has been identifying hidden reserves across the country over the past two decades, which means that these reserves have no signs on the surface, so we hope to be able to identify them using aerial geophysics,” Shahidi said.
Back in May, IMIDRO had announced that new mineral reserves worth over $28.7 billion have been discovered across the country over the past eight years.

Having 81 different types of minerals, Iran is one of the top 10 mineral-rich countries across the globe. In this regard, the Iranian government has been seriously pursuing several programs for promoting the mining sector as a major contributor to the country’s economic growth.
Iran's proven iron ore reserves are 2.7 billion tons, while the country’s copper reserves are 2.6 billion tons. The country also has 11 million tons of zinc reserves.
The total proven reserves of Iran's mines are expected to reach more than 100 billion tons with the implementation of the Industry, Mining, and Trade Ministry’s exploration programs over 500,000 square kilometers of new mineral zones.