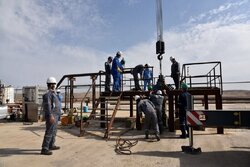 Iranian Oil Ministry is going to use the capabilities of the country’s knowledge-based companies to implement a program for improving the recovery factor of 750 oil fields across the country.

In this regard, the ministry will be collaborating with Iran National Innovation Fund (INIF) as the government body in charge of supporting knowledge-based companies, Shana reported.
To brief the companies and investors about the details of the mentioned program, INIF is going to host a meeting in which the project will be presented by the officials of National Iranian Oil Company (NIOC) to financial institutions, traders active in money and capital markets and other investors.

In this meeting, while introducing the generalities of the project, investment opportunities in this field will be explained to investors and they will also be introduced to the representatives of the knowledge-based companies that are going to work on the project.
Over the past two decades, the Iranian Oil Ministry has become more and more determined to collaborate with knowledge-based and research-based companies, universities, and research institutes to advance its development goals.

To pursue its new goals, the Oil Ministry has signed numerous memorandums and agreements with domestic knowledge-based firms and research institutions in recent years and such entities now play a significant role in making the country’s oil and gas industry more and more self-reliant.

No guarantees Swiss will always have enough gas, minister says