Trade of mining companies' shares at stock market up 71% 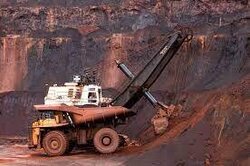 The total sales of the shares of Iran’s major mining companies through the stock market reached 5.538 quadrillion rials (about $20.67 billion) in the previous Iranian calendar year (ended on March 20), to register a 71-percent rise year on year, IRNA reported.

As reported, the mentioned companies accounted for 21 percent of the total shares sold on the stock market in the mentioned year.

Having 68 different types of minerals, Iran is one of the top 10 mineral-rich countries across the globe. In this regard, the Iranian government has been seriously pursuing several programs for promoting the mining sector as a major contributor to the country’s economic growth.
Iran's proven iron ore reserves are 2.7 billion tons, while the country’s copper reserves are 2.6 billion tons. The country also has 11 million tons of zinc reserves.

Back in November 2021, the deputy head of Iran Chamber of Commerce, Industries, Mines and Agriculture (ICCIMA)’s Mines and Mining Industries Committee said the country’s mining sector requires $50 billion-$70 billion of investment to reach a proper development level.
The stock market has been seen as a major source for the country’s mining companies to attract the necessary resources for funding their development projects.