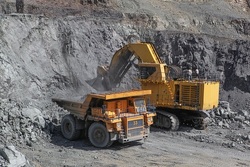 Production of coal concentrate in Iran reached 184,587 tons during the first three months of the current Iranian calendar year (March 20-June 21), which was 44 percent more than the output in the first quarter of the previous year, according to the data released by the Iranian Mines and Mining Industries Development and Renovation Organization (IMIDRO).

The mentioned companies extracted about 525,144 tons of coal ore in the said quarter, of which 450,967 tons was extracted by Tabas Parvadeh Coal Processing Company, 44,481 tons was extracted by Tabas Coal Complex, and Central Alborz Coal Company extracted 29,746 tons.
Due to the special conditions of coal mines in Iran, these mines are subject to tax exemption and any miners who need mining machinery can use the facilities and tax exemption in this sector to import their necessary machinery.

The country's average annual coal concentrate production is about 1.5 million tons, while the country's current demand has exceeded two million tons.
Currently, Iran’s coal sector provides employment for 17,000 people, however, the capacity of the country’s coal mines is much more than this figure, and the development of the mining sector and modernization projects can play an effective role in increasing employment in this sector.
Unofficial data indicate that there are 185 small and large coal mines in the country, of which more than 59 percent are currently active, while 10 mines are being equipped and prepared, and the rest are idle.