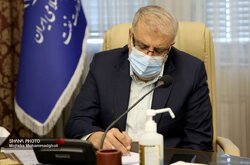 Iranian Oil Minister Javad Oji has announced the signing of a memorandum of understanding (MOU) between the oil and defense ministries for cooperation in manufacturing high-tech oil industry equipment, Shana reported.

Oji made the announcement on his Twitter account on Sunday, saying: “Military industries are among the technological pioneers in the world, and many technologies have been developed by these industries for the first time. By signing a memorandum of understanding with the Ministry of Defense, we have tapped into this capacity to produce the sophisticated equipment needed by the oil industry, especially in the high-tech sector."

Oji has previously said that domestic producers are currently supplying over 70 percent of the oil industry’s needed equipment, adding that this figure can increase to 95 percent.
The indigenization and domestic production of oil and gas industry equipment have been always among the objectives of the Iranian Oil Ministry. However, the issue became further highlighted since the re-imposition of the U.S. sanctions and Washington’s determination for cutting off the Islamic Republic’s ties with the world advances in knowledge and technology, especially in the oil and gas sector.

In the past few years, the ministry has been seriously supporting knowledge-based companies and startups, and in this regard, several events, exhibitions, and panels have been held to encourage the mentioned companies’ contribution to the country’s oil and gas industry.

Iraq says gas imports from Iran at 40 mcm per day